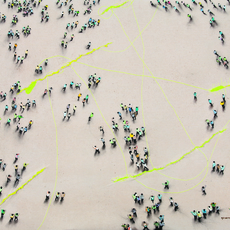 From the beginning of his career, Juan Genovés, trained in the Valencia Fine Arts School, where he was a restless artist, concerned both with the impending need of renovation of the Spanish art scene, and art and the artist´s role in society.

Juan´s strong conviction in the transforming capabilities of art, as well as his concerns about the world around him, led Genovés to join a number of movements that were highly significant in the Spanish postwar scene: Los Siete (The Seven) 1949, Parpallós (1956) and Hondo (1960). Within the latter, – a new approach to figurative painting as opposed to informalism, Genovés developed new work which was both expressionist and provocative.

The last few years his work, Juan Genovés has begun an extensive research on static movement in painting, and the crowd has become the starting point to talk about the challenge involving painting and visual rhythm.