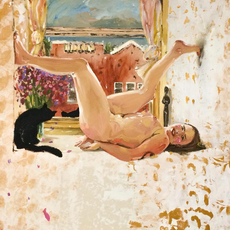 Katarina Janeckova Walshe (b. Bratislava, Slovakia, 1988) currently lives and works between Corpus Christi, Texas and New York City, in the United States. Janeckova documents her life in various portraits and depictions of figures in peculiar or provocative situations, combining unvarnished reality and psychological fantasy. Her images are dominated by female subjects who occupy female spaces such as kitchens, bedrooms, and balconies; they are nude and pretty, though posed in opposition with power and influence. Bears stand in for men, female body builders squat and flex on flower vases, and attractive women are pleasured by multiple others. Janeckova examines relationships, with herself and perceived partners, while prompting the viewer, through her representations and symbolism, to connect what they see to their own sexuality, identity, and history. Janeckova has shown actively since 2010 and completed her master’s at the Academy of Fine Arts and Design in Bratislava in 2013.