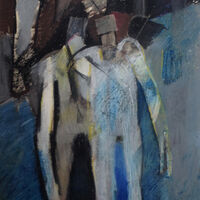 Keith Vaughan was a British painter best known for his muted abstractions of male nudes, landscapes, and architecture. He meshed the technical practices of Paul Cézanne, Georges Braque, and Nicolas de Staël to create a unique aesthetic expression, as exemplified in Bather (1961). Vaughan was a self-taught painter and, according to the diaries he kept, perhaps used the medium as a means to cope with the frustrations of his unfulfilled homosexual fantasies. Born on August 23, 1912 in Selsey, United Kingdom, he worked in advertising until World War II, when he was forced to serve despite being a conscientious objector. In wartime, he befriended Graham Sutherland and John Minton, whom he lived with following the war’s end. Together, they represented part of the Neo-Romantic circle of the immediate postwar period, though Vaughan soon after gravitated towards abstraction. The artist went on to teach in London at the Camberwell College of Arts, the Central School of Art, and the Slade School. Vaughan’s troubled, personal journals extensively recorded his life and internal struggles, and were published in part in 1966, and more completely in 1989—years after his death by intentional overdose on November 4, 1977. Vaughan’s works are in the collections of the Tate Gallery in London, the Scottish National Gallery of Modern Art in Edinburgh, and the Manchester Art Gallery, among others.