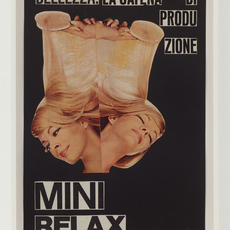 Ketty La Rocca (1938-1976) ranked among the most important proponents of Conceptual and Body Art in Italy in the 1960s and 70s. Based on a visual poetry, she radically dealt with the socio-political limits of the meaning of language and images in her collages, performances and photographs. A central aspect is the examination of the bodily gesture as an “original means of communication”. A central work is her film “Appendice per una Supplica” (Appendix for a Petition), which was screened at the Biennale di Venezia in 1972: It shows a pair of male and female hands against a black background gesticulating an entire repertoire of possible meanings and interpersonal tensions. This experience of one’s own identity and corporeality in relation and demarcation to the “other” social space is also revealed in La Rocca’s typographic sculpture and photo series “J” (= I) from the late 1960s. Her typographic sculptures literally transfer the “I” to the “other” space. Her staged photographs depict the artist in interaction with her “J” sculpture. The monolog is staged outside of the own “I” in the “other” space, yet being part of the same one. In Ketty La Rocca’s words: “The you has already started at the border of my I.”