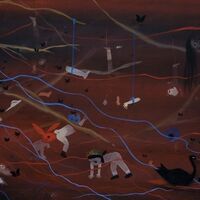 Konstantin Kakanias (born September 18, 1961 in Athens) is a contemporary Greek painter and multimedia artist. He currently lives and works in Los Angeles and Greece. Throughout his career Kakanias has created drawings, paintings, sculptures, performances, ceramics and books.
Kakanias' work does not belong to any single style. He is known to explore a range of themes in his work from the light and comic to the dark and psychological.

Kakanias attended the Fashion Institute of Technology in New York City, majoring in Textile Design, from 1977-1979. Kakanias moved to Paris in 1979. He attended the Studio Berçot where he studied Fashion and Art. He was also taught by the Italian artist and stage designer Lila de Nobili. Kakanias started his career at 22, working as an illustrator for newspapers and magazines such as French Vogue and Vogue Italia. He created textile designs for Yves Saint Laurent and Christian Lacroix.

In 1984, Kakanias moved to Luxor, Egypt to study Ancient Egyptian art and remained there for a year. His art has been influenced by this experience. "Echoes of pharaohs and hieroglyphs reverberate in many of Kakanias' drawings today."

Kakanias moved to Los Angeles in 1997. For several years he continued working on the adventures of Mrs. Tependris and in 2002 published "Mrs. Tependris: the Contemporary Years." In 2004 Kakanias was commissioned by the Greek Ministry of Culture to create a book for the 2004 Summer Olympics in Athens.

Kakanias has exhibited around the world in museums and galleries, notably "Time Goes By So Slowly" at the Goulandris Museum of Cycladic Art in 2006 and "A Tribute to Antonis Benakis" at the Benaki Museum in 2004-5. In 2008 he collaborated with Diane von Fürstenberg to create the comic book Be The Wonder Woman You Can Be. (DC Comics 2008). He has done numerous private commissions. In 2004 Kakanias frescoed a church in Spain for Carolina Herrera Jr.