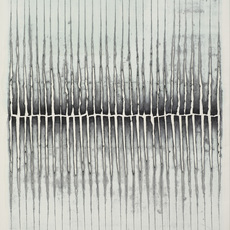 Kwon Young-woo graduated from Seoul National University, Seoul, South Korea with a BFA in Oriental Painting in 1950, and an MFA in Oriental Painting in 1957. His first solo exhibition, held at Shinsegae Gallery, Seoul in 1966, drew broad attention from colleagues of the Korean and Japanese avant-garde but also sent ripples through Western art circles. Kwon employed layers of hanji Korean mulberry paper, which he glued on a flat plane leaving visible traces of actions such as puncturing, pressing, scratching, and tearing the material. In performing this technique Kwon relies on his fingers as the main tools of production highlighting the structure of the support. By the time of his first visit to Paris in 1975, Kwon’s process had become very refined. Sheets of varying thicknesses were pushed and pulled into mountain-like forms, the application of more delicate surface layers often resulting in a gauzy veil that covered the entire artwork in a luminescent haze. In 1978, sponsored by the French government, he moved to Paris. There he began experimenting with puncturing the surface of the canvas with a sharp tool. Additionally, the re-introduction of colored inks, which had been central to his training in Oriental Painting, allowed Kwon to further investigate the compositional and haptic potentialities of medium and support. The interplay of various layers of different paper lets the ink spread unevenly across its torn edges, forming patterns that stress the technical and material variations in the work. In 1989 Kwon returned to Korea and settled in Yongin, Gyeonggido, where he established a studio and continued to expand his practice, exhibiting new works until his death in 2013.