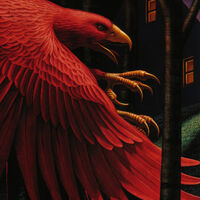 Leonard Koscianski was born in Cleveland, Ohio. A student of R. Buckminster Fuller, and noted American painter Wayne Theibaud, he received his Bachelor’s degree from the Cleveland Institute of Art and his Master’s degree from the University of California, Davis.

An American painter, with a unique visionary style, he has exhibited his psychologically charged artwork worldwide. He is represented by Stremmel Gallery in Reno, Nevada, Bernarducci Meisel Gallery in New York, and the J Willott Gallery in California.

His artwork is included in many public and private collections like the Metropolitan Museum of Art in New York, the Philadelphia Museum, and the Chicago Art Institute. It has appeared in the New York Times, the Los Angeles Times, Art News, Art in America, and Art Forum.

A popular professor and speaker, he has received numerous awards including the National Endowment for the Art’s Individual Artist Fellowship, and the Rockefeller Foundation’s BellagioFellowship. He lives and works in Annapolis, Maryland where he is a member of the city’s Art in Public Places Commission.