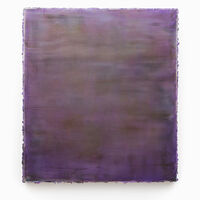 Lev Khesin, born in 1981 in Pensa, Russia, as the son of an artist couple - father and mother icon painter - is a child of his time. Galerist Johannes Zielke sees Khesin's new works as "only consistent", which he sees in the tradition of American color field painters. Ad Reinhardt, for example, revolutionized art history with his Black Paintings, just as Mark Rothko did with his black triptych, which he created in 1971 for a chapel in Houston, Texas. "For me, Lev is one of the few artists for whom the term 'avant-garde' still applies today," explains Zielke.
Khesin has completed study trips in the US and Japan, and his works have also been exhibited in Italy, Russia, Germany, the Netherlands and Australia, attracted wide attention everywhere.
Khesin with its sublime approaches art historically clearly in the episode of Rothko, Newman and Gottlieb, his materiality is surprisingly different: Khesin works with silicone, a soft and murky material. In doing so, he often stirs the pigments into the transparent mass prior to the painting process, and partly spreads them during the painting process. He needs several months for each object that he uses with spatulas and squeegees. By painting the paint, it is not unusual to find hanging forms that develop their own feel and invite them to touch. his formative will is accompanied by a deep humility in the face of natural, uncontrollable processes. Khesin himself compares painting with the art of archery and various Zen rituals and focuses exclusively on the current action: "The image becomes evidence of a completed meditation". Anyone who takes time for Lev Khesin's work experiences how they develop their own lives. The semitransparent image surfaces change their character. The "Dark Matter" reveals a veritable "color spectacle". And no, black is definitely not just black.