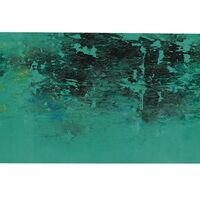 Liu Kuo-sung was born in Anhui, though he traces his ancestry to Qingzhou, Shandong. He settled in Taiwan in 1949. Liu Kuo-sung began studying traditional Chinese painting in Wuchang at the age of 14, and at 20 he switched to the study of Western painting. In 1956, immediately after graduating from the Dept. of Fine Arts at NTNU, he founded the Fifth Moon Group, which launched the contemporary art movement in Taiwan and advocated full westernization of art. However, five years later he sensed that following and imitating exclusively Western contemporary art trends and styles was wrong, and he felt a powerful calling to promote and develop traditional culture. He began promoting “the modernization of Chinese painting” and raised a fresh new proposal—that “imitating the new cannot replace imitating the old; copying from Western art cannot replace copying from Chinese art.” Contemporary ink painting, which had started in Taiwan in 1961 and become fashionable by 1963, soon influenced ink painters in other countries in the East Asian Confucian cultural sphere.

Since 1965, he has had nearly 100 solo exhibitions, more than half of which have been at the invitation of museums. More than seventy museums, including the Palace Museum, Beijing and the British Museum, have collected his works. Eleven volumes of scholarly work on him have been published in Chinese, English, and German, and six textbooks in use in American and British universities cite his theories or include illustrations of his works. He has been called both “the father of modern Chinese ink painting.” and "a pioneer in Chinese modern painting".