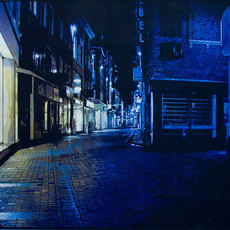 View all works
Bio
Submitted by End to End Gallery

Logan Hicks is an American stencil artist, currently living and working in Los Angeles, California. His hand-cut stencil process involves cutting a separate stencil for each color, then layering each color upon the next until the final piece emerges, often hundreds of hours later, as a hyper-realistic masterpiece. Originally a screen printer, Logan sold off his equipment to finance his migration from the East Coast to the West Coast, turning to stenciling to re-invigorate his printing. Since then he has become renowned as one of the most meticulous stencil artists working today. In recent years Logan has worked with companies such as K-Swiss, Disney, Red Bull, Royal Elastics and others to provide an urban feel to their advertising campaigns, and has lectured from Slovenia to Australia.