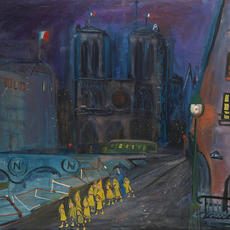 His beloved series, Madeline, brought Bemelmans his greatest success and lasting legacy. Even though he prided himself most on his paintings, he did not begin painting with oils until later in life. The first major exhibition of his work was held at Galerie Durand-Ruel in Paris in 1957. Even though, Bemelmans was largely self-taught, his art is beloved and works can be found in the permanent collections of institutions such as the Metropolitan Museum of Art. However, it is still the art featuring Madeline that remains most popular.