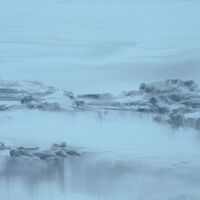 Based in Vila do Prado, Portugal, artist Luis Coquenão (Lobito, Angola, 1953) built his trajectory under various influences: abstraction and figuration, spirituality and naturalism, tradition and novelty. Strongly influenced by Chinese philosophy and painting, Coquenão creates his works in the certainty that nature exists both outside and inside the observer. Among his latest exhibits are: Marca D'Água, at Zipper Galeria, in 2015; Astarté gallery, Madrid in 2010, The Enchanted Mountain, Mario Sequeira gallery in 2011, Common Places II, Mário Sequeira Gallery, Braga in 2014 and Natura, Muñoz Foundation, Pedraza, Spain in 2015.