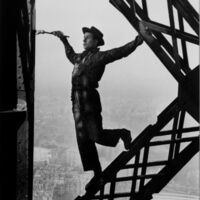 Marc Riboud was onf the the Twentieth Century’s leading photographers, particularly in the field of documentary photography. His images have been published in Life, National Geographic, Paris Match and Stern.

Marc Riboud was born in Lyon, France, on 24 June 1923. He took his first photographs at the age of 14, using his father’s Vest Pocket Kodak camera. Active in the French Resistance during the Second World War, he then took a degree in engineering at L’Ecole Centrale de Lyon before going on to work in a factory in Villeurbanne. After a week’s holiday, which was spent photographing a festival in Lyon, he decided not to return to his job at the factory and focussed instead on his photographic work.

The following year he moved to Paris, where he met Henri Cartier-Bresson and Robert Capa, who invited him to join Magnum Photos. While living in Paris, he took one of his early iconic photographs of a man posing while painting the Eiffel Tower, which was published in LIFE magazine in 1953.

In 1955 Riboud travelled to India. He spent the following 10 years travelling around Asia, documenting the life and culture of each country he visited including China, Cambodia and Japan.

The Vietnam War provided him with a new focus and he made three trips to the country, the first during 1968, during which he photographed the effects of the war in both the North and the South. He also photographed the reaction to the war in America, his photograph of a young girl confronting police in Washington has become one of the most famous images in the history of photography. In 1976 he became president of Magnum Photos, a position he held for three years before leaving the organisation and continuing his travels in Europe.