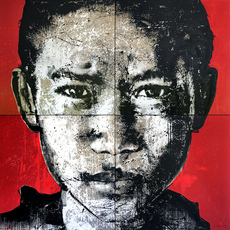 The Vultus collection by Mario Henrique is based on the concept of hypernormalisation - a term first coined by the Russian anthropologist Alexei Yurchak to portray a “fake world” created by corporations and kept stable by politicians, due to their inability do deal with the complex aspects of the “real world”. The British filmmaker Adam Curtis would later use the term as the main subject for his 2016 documentary, elaborating on how this fake and simplified world is designed to manipulate the general population, thus mining the overall perception of reality. Vultus is Latin for the visage, as in appearance or look. These paintings depict victims of this warped reality in which we are immersed, namely refugees and migrants. The purpose of the collection is to bring those faces out of obscurity and consequently offer some resistance to the hypernormalisation of the world.