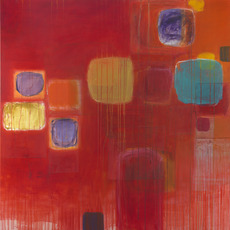 Martyn Brewster was born in Oxford in 1952. He studied Art and Design in Hertfordshire and Fine Art (Painting) in Brighton followed by a Postgraduate diploma in Printmaking. He has been working as a professional artist ever since with regular solo shows in museums and galleries in London and the UK as well as exhibitions in USA, Canada and Europe. In London and New York he is represented by Waterhouse & Dodd. He has won numerous awards and his work is in private, public and corporate collections worldwide including the V&A Museum and the British Museum. Recently his work has entered the the collections of Pallant House, Chichester and the Hepworth Wakefield. This is his first exhibition at Sladers Yard.

Martyn Brewster has lived near the cliffs, open skies and beaches of Southbourne, Dorset, UK for thirty years inspired by the natural landscape, the sea and the light as well as by paint itself. His seductive use of colour and vigorous originality give his work its lasting appeal.

Martyn Brewster spent this summer drawing with pen and wash on the Dorset coastline he loves mostly between Bournemouth and Hengistbury Head. He makes figurative nature studies on site in front of the motif mostly in blacks, whites and tones, searching to express the composition and drama he sees in the multiplicity of nature.

His drawings feed into the abstract colour paintings in oil and in acrylic which he paints in his studio. Colour for him is an emotional vehicle. He talks of colours ‘having a presence in themselves’. The play between them within a composition has always fascinated him.

Recently he has introduced a more restrained palette bringing the tones and subtlety of his drawings into his paintings. Flashes of vivid colour move amongst neutral tones of light and dark, translucent and opaque, creating dynamic canvases. The quieter approach seems to give an entry to paintings of a fresh contemplative power and strength.