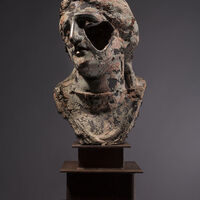 Massimiliano Pelletti is born the 27th of January 1975 in Pietrasanta (LU), the city where he lives and works today. During his childhood, he usually spends time inside the family’s artisan laboratory, where, thanks to his grandfather Mario, he learns the basis of working with marble.
After the high school diploma, obtained at the “Liceo Artistico Stagio Stagi” in Pietrasanta, he graduats, in philosophy, from the “Università di Pisa”. Massimiliano is deeply influenced by and passionate about this subject, which echos in his creative work.
The year 2006 witnesses his debut as an artist, when he wins the entry to the XII Biennale dei Giovani Artisti d’Europa e del Mediterraneo. Subsequently he participates other important exhibitions, in Italy and abroad, such as “Biennale d’Alessandria d’Egitto” and the participation at the “Padiglione Italia”, curated by Vittorio Sgarbi, during the “LIV° Biennale d’Arte di Venezia”.
From the begin Massimilano used the noble matter, derived from his native land, as the principal element for the creation of his artwork. In time, he extends the range of materials to quartz, onyx, limestone and many other stones never used before in the world of sculpture, harnessing every element that rocks and nature have to offer. Pelletti’s treatment of forms is strictly traditional thanks to among other things, the personal collection of plaster models inherited from his grandfather.
In 2014, he is among the winners of the “Premio Fondazione Henraux”, curated by Philippe d’Averio. Pelletti becomes then is the object of various publications and articles in magazine specializing in contemporary art. Along the years, he exhibits in several museums and public spaces such as Villa Croce and “Sant’Agostino” in Genova, “Abbazia di San Zeno” in Pisa, “Tempio di Adriano” in Rome, “Castel S. Elmo” of Naples, “Università della Sapienza” of Rome, “Museo Pecci” of Prato, “Museo Civico Paolo Giovio” of Como, “Palazzo RISO Museo