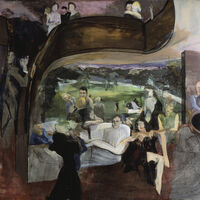 Michael Andrews is considered one of the giants of Post-War British Art, closely associated with the School of London of painters that frequented the drinking halls of Soho such as Francis Bacon, Lucian Freud, Leon Kossoff and Frank Auerbach. While Andrews became a part of this Bohemian group after graduating from the Slade in 1953, he was also careful to forge his own unique style that was the poetic equal of these iconic artists. Notoriously meticulous, Andrews produced less than 250 paintings and watercolours during his life and is best known for his vast landscapes of the Scottish Highlands and Australian Outback as well as the pivotal final paintings of the River Thames. Such was the air of mystery that surrounded Andrews during his life that Tate Gallery director at the time, John Rothenstein, famously wrote: ‘(Andrews is) in danger of being taken for a rumour rather than a person’.