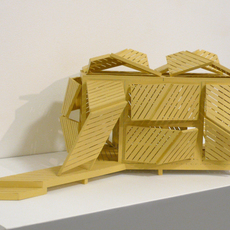 Michael Jantzen is an internationally known artist whose work has been featured in hundreds of articles, books, magazines, and newspapers from around the world. His work attempts to merge art, architecture, technology, and sustainable design. He has not been educated as an architect but rather as an artist, using architecture as an art form. By incorporating his surroundings, he assimilates his pieces simultaneously to fit within the environment and likewise the environment to accommodate his pieces. Much of his work, in one way or another, explores new ways of thinking about the built environment.

Jantzen has always approached his art and design as an inventor, rather than a stylist. By creating architectural art, he is reinventing the built environment so that it can continually be altered to meet the changing needs and desires of its occupants. At times, he attempts to invent systems and components that can be assembled and reassembled in various ways, thus creating form from symbolic references, which relate directly to the specific site and/or function of the project. As a result, another aesthetic component evolves that is unexpected yet equally relevant.