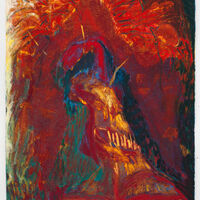 View all works
Career highlights
Group show at a major institution
Hammer Museum
Reviewed by a major art publication
Artforum, and 1 more
Included in a major biennial
Made in L.A.
See all past shows and fair booths
Bio
Submitted by Blum & Poe

Mimi Lauter is a Los Angeles-based artist whose oil and soft-pastel works on paper assemble abstracted narratives drawn from subconscious memory, literature, sociopolitical surroundings, and classical mythology. For her first exhibition at Blum & Poe Los Angeles in 2018, Lauter presented a twenty-four part installation entitled "Sensus Oxynation" that functioned as the interior of a chapel—each wall a grouping of lush, highly chromatic works. Her practice proposes a secular relationship to spirituality in painting—belief in and devotion to the painting itself. Imagery of flowers, vases, the four elements, and other instances of iconography are meant to conjure the history of painting. A number of works point to the tradition of still lifes, implicating interior and psychological spaces. Lauter is informed and influenced by artists such as Odilon Redon, Jean-Édouard Vuillard, Pierre Bonnard as well as other members of the Nabis and Post-Impressionists, who impress upon the aesthetic foundation of her work.