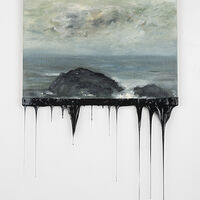 Through the intervention of images and objects of daily consumption, Minerva Cuevas invites us to rethink the role corporations play in food production and the management of natural resources. Employing irony and humor, her work seeks to provoke reflection about the impact that local actions can have on the enforcement of fair labor practices and the redistribution of monetary flow. Her practice encompasses a wide range of supports –painting, video, sculpture, photography, and installation–, through which she investigates the politics and power structures that underlie certain social and economic ties. Her interdisciplinary projects combine aspects of anthropology, product design, and economics, in order to explore different ways of intervening urban spaces, museums, and galleries. She appropriates the language of the establishment (branding, advertisement, and commerce) while delivering a message of non-compliance and resistance. A relentless critic of reality, Cuevas finds her source material by analyzing the notions of value, exchange, and ownership that rule a capitalist economy, as well as their consequences. Her work serves as a tool to discuss the condition of the individual under a capitalist regime: constant abuse, dispossession and estrangement from ancestral and cultural identity, but also the latent possibility of revolt implicit in the everyday.