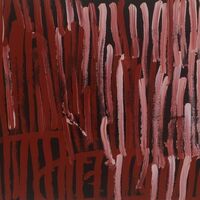 Born C.1920 in central Australia, Minnie Pwerle passed away in 2006. Her home country was Atnwengerrp and she spoke both Anmatyerre and Alyawarr languages. Before she started painting on canvas in late 1999 Minnie was commissioned to paint a large Batik for Robert Holmes a Court as a part of the women's batik projects in Utopia. In 2000 Minnie had her first solo exhibition in Melbourne. Her painting career was reasonably limited as she only began painting in her late 80's but she immediately captured the attention of gallerists and art collectors.
Minnie Pwerle's main Dreamings are Awelye-Atnwengerrp, Bush Medicine and Bush Melon Seed, all of which convey her connection with her country and the food it provides the people. Awelye-Atnwengerrp is depicted by a series of rythmic linear patterns painted in different widths and colours. This pattern represents the designs painted on the top half of the women's bodies during ceremonies in their country of Atnwengerrp. Bush Melon Seed comprises large and small patches of coloured circles strewn across the canvas. The larger roundels of concentric circles represent the women’s ceremony places.
This Dreaming tells the story of the sweet bush tucker that comes from a very small bush and is only found in Atnwengerrp. Once very abundant and fruiting in the summer it is now very hard to find. Minnie Pwerle and the other women used to collect this fruit and scrape out the small black seeds. They would then eat the fruit immediately or cut it into pieces and skewer them on a piece of wood and dry them to be eaten in the times when bush tucker was scarce.
Minnie, lived in Utopia with some of her children and family. Minnie had seven children including well-known artist Barbara Weir. Barbara Weir was taken from Minnie as a child becoming one of what was know as "the stolen generation" and it was her reunion with her mother that stimulated Minnie's painting.