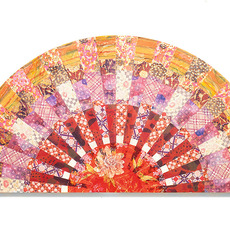 View all works
Career Highlights
Group show at a major institution
The Museum of Modern Art (MoMA), and 2 more
Collected by a major institution
Museum of Modern Art (MoMA)
Reviewed by a major art publication
Artforum
Included in a major biennial
Whitney Biennial
See all past shows and fair booths
Bio
Submitted by Gallery Aferro

Miram Schapiro found success early as a hard-edge geometric-style painter. Influenced by the feminist movement of the early 1970s, she changed her style radically, embracing the use of textiles as symbolic of feminine labor. She is credited with establishing the movement called Pattern and Decoration (or P & D).This art movement challenged traditional Western European art by foregrounding decorative patterns and textiles from other cultures such as Chinese, Indian, Islamic, and Mexican. Schapiro coined the term “femmage,” which stands for the female laborer’s hand-sewn work (such as embroidery, quilting, cross-stitching, etc.) that rivals and precedes the “high-art” collage.