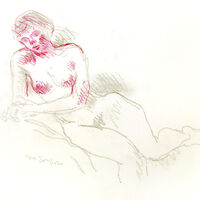 Soyer was born in Borisoglebsk, Russian Empire, in 1899. His father was a Hebrew scholar, writer and teacher. His family emigrated to the United States in 1912. Two of Soyer's brothers, Raphael (his identical twin) and Isaac were also painters. Soyer's wife, Ida, was a dancer, and dancers are a recurring subject in his paintings. Soyer studied art in New York, first at Cooper Union and later at the Ferrer Art School, where he studied under the Ashcan painters Robert Henri and George Bellows. He had his first solo exhibition in 1926 and began teaching art the following year at the Contemporary Art School and The New School. He died in the Chelsea Hotel in New York while painting dancer and choreographer Phoebe Neville.