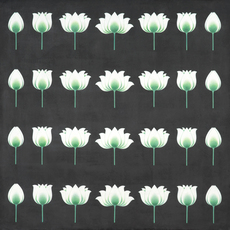 After graduating with an MA in Modern Languages from Oxford, Olivia spent a year at Wimbledon Art College before moving to India in 1989.

Following in the footsteps of her kinsman, James Baillie Fraser who painted India, its monuments and landscape in the early 1800’s, Olivia set out to continue where her kinsman had left off, painting the architecture of Delhi and its people. James Baillie Fraser also commissioned local artists to paint what has become the famous ‘Fraser Album’ – the greatest masterpiece of Company School Painting portraying the different types of people and their jobs, crafts or castes against stark white backgrounds. This hybrid form of painting where Indian artists created something that mixed techniques and ideas from the East and West greatly influenced Olivia’s early work during the 1990s.

In 2005 she decided to study the traditional Indian miniature painting techniques under Jaipuri and Delhi masters, and now uses this in her work with its gem-like stone colours, its unique miniature brushwork, and its elaborate decorative and burnished surfaces. Having been especially influenced by Nathdwara pichwai painting and early C19th Jodpuri painting, Olivia has been exploring its visual language, reaching back to an archetypal iconography strongly rooted in India's artistic and cultural heritage that can breach borders and be relevant to her twin life between East and West.

Her work has been shown in galleries and art fairs around the world and in 2015 her work was shown at the Venice Biennale. Her paintings are now in collections in India, UK, France, Belgium (Museum of Sacred Art), UAE, Singapore, Australia, China and the USA.

Olivia divides her time between Delhi and London.