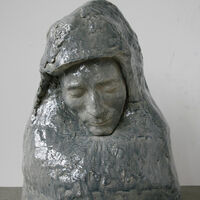 Paloma Varga Weisz (1966) lives and works in Düsseldorf, Germany. Her wood-carved sculptures, paintings, drawings and watercolors explore themes of memory, mortality, transformation, metamorphosis, the uncanny and the tragicomic. Art-historical and literary resonances pervade her work – German folklore, Christian iconography, and Modernist sculpture. Varga Weisz subsumes these influences into a distinctive personal style, characterized both by playful surrealism and emotional candour. In many of her sculptures and drawings, she depicts imaginary characters – hybrid anthropomorphic creatures which recall the surreal bodies of fairy tales and folklore. Elsewhere, she assembles found and crafted objects in kunstkammer-style arrangements which suggest repositories of memory or allegories of the subconscious. Woodcarving has formed a central aspect of Paloma Varga Weisz’s work since the beginning of her career. She trained as a woodcarver in Bavaria from 1987-2000, and has continued to utilize and develop this technique, tapping into its rich iconographic history.