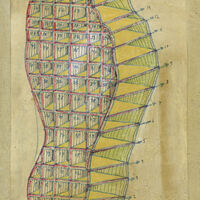 Romanian-born artist Paul Neagu's philosophical approach to his work led him to push the boundaries of abstraction. Having used his own body as a medium in his performance of ‘ritual’ events, Neagu often referred to embodied experience. He promoted physical engagement with his work: his palpable objects and tactile boxes deliberately invited touch. Always informed by his experience of conflict and a desire to express the paramount importance of the spirit in the modern world, his works command an intensely visceral response. In 1972 he established the Generative Art Group, encompassing five fictitious members, with each alias representing a different part of his creative psyche. Neagu's assertion that sculpture could be used as a symbolic language led him to explore his Hyphen concept across media, scale and spiritual boundaries throughout his career.

Paul Neagu spent his early years living under Stalinist military occupation in Bucharest. He studied at the Bucharest Institute of Fine Arts before moving to London in 1969, with his first museum show at the Museum of Modern Art, Oxford in 1975. Neagu was a well-respected teacher, most notably lecturing at the Hornsey, the Slade and the Chelsea School of Art, and in 1976 he became Associate Professor at the Royal College of Art. Among his students were Antony Gormley, Anish Kapoor and Rachel Whiteread.