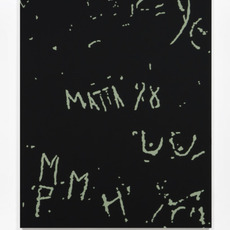 Before even initiating any kind of pictorial gesture, Pedro Matos acts as a collector of images. He photographs, steals and receives graffiti images as references. Selected work generates the raw material, later manipulated on software then projected on canvas. The digital imagery hence becomes the incipit of the pictorial gesture and influences the experience of the work. When we’re gone, displays melted surfaces of zoomed, almost cryptic graphic inscriptions. The works of Pedro Matos are the result of his online and offline explorations where memories, liquefied by painting, ends up oscillating between capturing and disembodying materiality. The source image experiences spread and loss of information throughout each step of the creative process. Therefore the narrative is not so much focused on the nature of the inscriptions but rather on their asperities and their common intentions to manifest a presence, a moment, a passage. Yet here the “uniqueness of existence”1 disintegrates, the hic and nunc2 is diluted into a more ambiguous and contemplative context, intentionally more vaporous.

The work of Pedro Matos is rooted in the existing porosity between abstraction and representation, one always on the edge of the other, to invest a contemplative feeling. It is this material from reality, underestimated and neglected, that becomes a relic of the ordinary. Paradoxically, it is not after nature but from the image that the pictorial gesture exceeds the time that flows between the initial fleeting gesture and the image, capturing its already abstract decay. What might seem to be hesitating between the figurative and its opposite resolve itself in a painting with a more metaphysical sentiment.