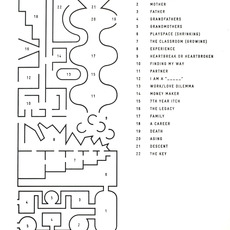 View all works
Career highlights
Solo show at a major institution
Hammer Museum, and 3 more
Group show at a major institution
The Museum of Modern Art (MoMA), and 9 more
Reviewed by a major art publication
Artforum, and 4 more
Included in a major biennial
Venice Biennale International Exhibition, and 5 more
See all past shows and fair booths
Bio
Submitted by Lisson Gallery

A socio-political critique of contemporary gun culture is addressed in Reyes’s Palas por Pistolas (2008), in
which the artist worked with local authorities in Culiacán, Mexico, to melt down guns into shovels, intended to
plant trees in cities elsewhere in the world. Similarly, in Disarm (2013) the Mexican government donated over
6,700 confiscated firearms for Reyes to transform into mechanical musical instruments, which are automated to
play a delightful, if surreal loop, retaining the raw emotion of their origination.

Issues of community and compassion were addressed in ‘Sanatorium’, activated at the Solomon R. Guggenheim
Museum in New York in 2011, dOCUMENTA (13) in Germany in 2012, and in 2014 at The Power Plant in
Toronto and The Institute of Contemporary Art in Miami. In this work, visitors were invited to sign up for a
‘temporary clinic,’ with the mission of treating various kinds of urban malaise. In 2016, Reyes presented
‘Doomocracy’ in the Brooklyn Army Terminal in New York. Organised by Creative Time, this “political house
of horrors” was an immersive exhibition marking the confluence of two events haunting the American cultural
imagination at the time: Halloween and the 2016 presidential election. Presented in the form of a haunted house,
visitors navigated a labyrinth of rooms to explore the complexities of political anxiety, with the intention of
fostering dialogue around the contentious state of global politics.