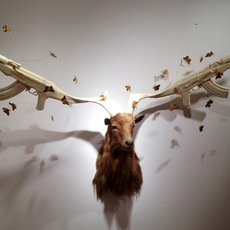 Peter Gronquist is an artist who enjoys manipulating expectations throughout his various mediums. Through painting, sculpture and infinity mirrors he forces the viewer to stop and dismantle what they are experiencing. His infinity mirrors are built to human scale, heightening the sensation that one could fall in at any moment. The imagery contained in these visual abysses can be as benign as a flower or as menacing as an automatic weapon. Gronquist is concerned with expressing the contradictions of American consumerism and what he calls “hyper American culture”.

Born 1979 in the USA, Peter lives and works in Portland, OR after residing in Oakland, CA.. He attended the School of Visual Art New York and received a BA in painting from San Francisco Art Institute in 2001. He has shown at Gallery 1988 in Los Angeles, Shooting Gallery in San Francisco, 1 AM Gallery in San Francisco, The Pittsfield Museum of Art, Scope New York and Miami, and is collected internationally. Peter was recently named one of the top 15 new artists to collect by Business Insider.