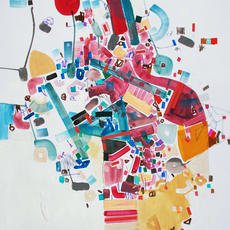 Philippe Halaburda is a French artist who has coined the term Geographic Abstraction to describe his work. Through his use of color and lines, Halaburda creates sharp imaginary landscapes that visualize the interconnectedness of humans and their environments.
Since moving to New York City in 2016, Halaburda’s work has been influenced by the city’s linear urban environment.
He describes his current work as geographic abstraction or psychogeographic mapping, and sees his designs as translating human and non-human interactions and emotions into colorful, imagined landscapes.
His work evokes the geometric constructions of Russian avant-garde artist Kazimir Malevich, and Halaburda has cited Piet Mondrian as an influence on his use of color.
In 2019, Halaburda published his first art book entitled ‘Spatial representation of emotion’ about his work in New York since 2016. Halaburda also offers commissions and public window tape art, including a recent display for the Hyatt Regency Hotel in Jersey City, NJ in 2020.