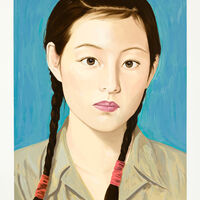 Born in 1962 in inner Mongolia, Qi Zhilong graduated from the Print-making Department of the Central Academy of Fine Arts, Beijing in 1987. Solo Exhibitions have been held at Schoeni Art Gallery, Hong Kong; Ray Hughes Gallery in Sydney and in Switzerland. Since participating in Chinese Avant- Garde Art exhibition in Taiwan (1993), Qi Zhilong’s work has been exhibited around the world including Art Chicago and Art Basel. Qi Zhilong is regarded as one of the most important artist of Political pop in post 1989 Chinese art. His consumer icon series helped gain him international fame. His works are somewhat plain and realistic, but almost sweet representations of pig tailed women from the 1950s and 1960s and consumerist people in the 1970s and 1980s.