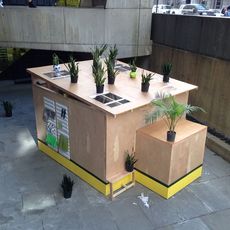 Born in Bayamon, Puerto Rico in 1982, Radamés “Juni” Figueroa obtained his BFA from Escuela de Artes Plásticas in 2007 and completed his Programa La Practica, Beta Local in San Juan Puerto Rico in 2003. In addition to his work as an artist, he has given talks at various institutions and art fairs, such as NADA in New York and The Art Institute of Chicago, and has acted as co-curator of the First Tropical Biennial that took place in San Juan in 2011, alongside curator Pablo Leon de la Barra. Most recently he has participated in the Whitney Biennial (2014) and his residency at the Malba Museum and La Ene in Buenos Aires, Argentina, which culminated in his site-specific installation being permanently acquired by the museum. He has held several solo exhibitions including a 2014 show at the Sculpture Center titled Naguabo Rainbow, Daguao Enchumbao, Fango Fireflies.