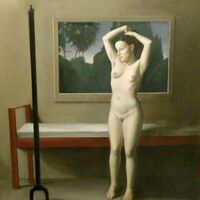 Of Korean descent, Raymond Han was born in Honolulu, Hawaii in 1931 and was based in New York City and upstate New York for most of his life. After study with Willson Young Stamper (1912–1988) at the Honolulu Museum of Art, Han moved to New York City and studied at the Art Students League of New York with Frank Mason (born 1921) and Robert Beverly Hale (1901–1985). His work is in the permanent collections of The Honolulu Museum of Art, the Munson-Williams-Proctor Arts Institute, Yale University, Goldman Sachs and Company, and the Picker Art Gallery, Colgate College, among many others. Notable solo museum exhibitions include the Fenimore Art Museum, New York (2015); the Museum of Art, Syracuse, New York (1997); the Academy of Arts, Hawaii (1995), and the Munson Williams Proctor Institute, Utica, New York (1982). Han passed away in Cooperstown, New York, in 2017. His Estate is represented by Jason McCoy Gallery, New York.