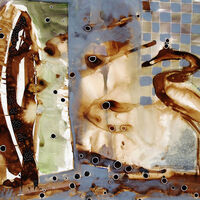 Born in Ismalia, Egypt and having studied at the University of Minya at the College of Fine Arts, being surrounded by outstanding Pharonic monuments and Coptic monasteries left a lasting impression on Reda Abdel Rahman, one of Egypt’s leading contemporary artists. It has resulted in his artistic expression focusing on the relationship between what he regards as his ancient Egyptian heritage and the demands of contemporary life. He now resides in New York City.
Not only has Reda enjoyed a prolific and international career in the arts but he has also encouraged others by participating in a number of varied initiatives designed to promote artists and the Egyptian art scene. In this regard, he has been integral to the formation of internationally recognized events such as the Luxor Painting Symposium and the formation of the annual Aswan Sculpture Symposium. He has led the Fustat workshops in Old Cairo that brings together a range of artists from around the Middle East. Reda also established an art magazine and curated a gallery in downtown Cairo, both titled Portrait. His artistic career has taken him around the world, from Latin America to Europe. He was an important founding artist in the CARAVAN arts initiative in Egypt, that seeks to use the arts as a means to build bridges between the creeds and cultures of the Middle East and West.