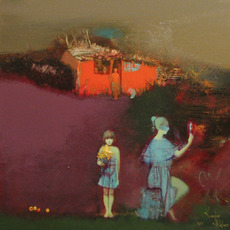 Korubin graduated from the Faculty of Fine Arts in Belgrade in 1974 and completed his postgraduate studies in the class of Mladen Srbinovic in 1976. From 1977 till 1979, he attended a specialization course in Paris at L’Ecole des Beaux Arts. He was a full-time professor at the Ss. Cyril and Methodius University of Skopje, Faculty of Fine Arts in Skopje, Macedonia until his retirement in 2013. Rubens attended numerous group exhibitions in Macedonia and abroad. He also realized more than 20 one-man shows in Skopje, Belgrade, Paris etc-Rubens takes Renaissance subjects and transports them to a modern frontier. His use of shading breathes light at almost any shade. His characters leap from the canvas, always the focal point yet not so much so as to be detached from the scene.
2006 Mosaic Macedonia in the Memorial Centre ASNOM - Pelince
2004 Mosaic Cupidae Legum Iuventuti at the faculty of Law Iustinijanus Primus in Skopje
Rubens is among those artists that have succeeded in their work to surmount, for themselves and for us, the limit of human fortuity. To convince us (or "fool" us) with his gentle artistic "caress" on the canvas, the velvet layers of delicately selected and coordinated colours that vibrate with the movements of nature, that the search for artistic "beauty" is still and very much worth our while. This is the form of struggle that Rubens has chosen to rise over the hopelessness and the ugliness that hover over modern day humanity in more ways than one." Boris Petkovski