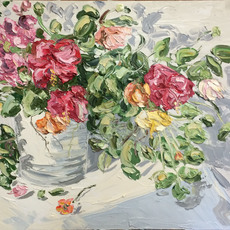 What makes West’s artworks so recognizable is the combination of texture, abstraction and calming colors. The movement of the paint strokes on canvas is reminiscent of a light breeze or waves. This is communicated even more clearly through the use of pastel and delicate shades of color in her artworks’ backgrounds. Within her artworks’ foregrounds, she sometimes opts for hints of brighter colors to add accents or simply continues with the same color palette to maintain the ethereal feeling. Overall, West’s color palette is very uniquely her own and conveys a very specific feeling of comfort associated with vague familiarity and softness.

Since West’s first break through solo exhibition in New York in 2011, her artworks have become highly sought after internationally. She has won and placed as a finalist in numerous worldwide art competitions and juried exhibitions throughout her courier. Within Australia itself, West has already established herself as central figure of the New South Wales and coastal art scene. Her artworks are exhibited with influential galleries across Australia as well as in New York.