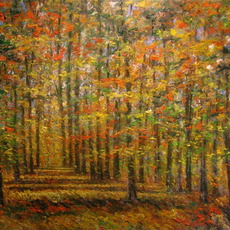 Samir Sammoun (born August 10, 1952) is a Canadian–Lebanese artist and telecommunications engineer. Sammoun works in a series of images from one palette. He works with oils on jute and linen canvas, applying a heavy impasto, created in fast emotional bursts of energy. The result is a spontaneous rendering of the subject, as if a flickering effect of light is coming through, reflected by the colors he places side by side and on top of one another on his canvas. Critics like Noel Meyer of MAGAZIN' ART[2] have said, "Sammoun attempts to make his audience feel the wind blow through the trees, the heat in the air and the colours of the sky ..." Victor Forbes Editor of Fine Art Magazine, has said that "Sammoun's emotional investment in each work is evident in every canvas."