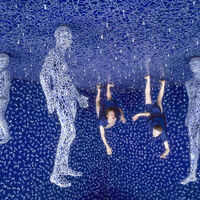 View all works
Career highlights
Group show at a major institution
The Museum of Modern Art (MoMA), and 2 more
Reviewed by a major art publication
Artforum
Included in a major biennial
Whitney Biennial, and 1 more
See all past shows and fair booths
Bio
Submitted by Holden Luntz Gallery

Sandy Skoglund was born in Weymouth, Massachusetts in 1946. She studied studio art and art history at Smith College in Northampton, Massachusetts from 1964-68. She went to graduate school at the University of Iowa in 1969 where she studied filmmaking, intaglio printmaking, and multimedia art, receiving her M.A. in 1971 and her M.F.A. in painting in 1972. Skoglund moved to New York City in 1972, where she started working as a conceptual artist, dealing with repetitive, process-oriented art production through the techniques of mark making and photocopying. In the late 1970s, Skoglund’s desire to document conceptual ideas led her to teach herself photography. This resulted in the kind of “staged photography” that other artists became involved with starting in the 1980s such as Cindy Sherman and David LaChapelle. This was a larger result of an interest in popular culture and commercial picture making strategies, resulting in the directorial tableau work Skoglund is known for today.

Skoglund bridges the boundaries between sculpture, installation art, and photography having become renowned for her large-format photographs of the original impermanent installations. She has often exhibited in solo shows of installations and photographs as well group shows of photography. Her work is currently included in such esteemed institutions as the Brooklyn Museum, the Centre Georges Pompidou, the Chicago Art Institute, the Los Angeles Country Museum of Art, the Metropolitan Museum of Art in New York, and the Whitney Museum in New York. She is a recipient of the Koopman Distinguished Chair in the Visual Arts for Hartford Art School, the Trustees Award for Excellence from Rutgers University, the New York State Foundation for the Arts individual grant, and the National Endowment for the Arts individual grant. Skoglund currently lives in Jersey City, New Jersey.