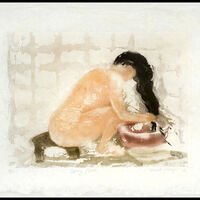 Born in Rochester New York, Sarah Brayer is an international artist who has shown in Japan, Hong Kong, United States, and Europe. Brayer is known for her aquatints, woodblock prints and poured washi paper works. She received her BA in studio arts from Connecticut College in 1978 and two years later, moved to Kyoto to study etching from Yoshiko Fukuda and traditional woodblock printing with the renowned Toshi Yoshida. She opened her first studio in 1986 in an old kimono weaving loft in northern Kyoto. Brayer was the first artist to be honored by Japan with an exhibition of her washi paperworks at Byodoin Temple, a World Heritage site that dates from the Heian period, as part of Kyoto’s 1200 year celebration in 1992. Brayer was again honored in 2007 as the first foreign woman in over half a century to be named cover artist for the CWAJ Contemporary Print Show in Tokyo. In 2012 Brayer discussed her unique work in Japanese paper and light at TED in Tokyo. Brayer exhibits her work internationally and her works are in the permanent collections of museums and institutions worldwide, such as the British Museum, the Sackler Gallery of the Smithsonian and the American Embassy, Tokyo.

In her most recent series, Luminosity: Night Paperworks, Brayer infuses her washi with photo-luminescent pigments. Powered by light exposure, these provoking and mysterious works reveal a different image at night than that seen during the day. In Brayer's words, "these images show us the place where something appears out of nothing and the returns to it; taking us to the edge of visual perception."