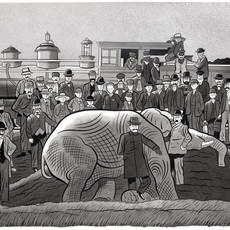 Julien Malland also known as Seth, was born in 1972, he currently works and lives in Paris (France). In the mid-90s, Julien Malland began painting murals in the 20th arrondissement of Paris under the name of Seth. He made himself known among Parisian graffiti artists by creating characters. As a graduate of the Ecole Nationale Supérieure des Arts Décoratifs of Paris (ENSAD) he published ““Kapital, one year of graffiti in Paris“ in collaboration with Gauthier Bischoff in 2000, which became the best selling book about French graffiti. Together, they founded Wasted Talent, a publishing house specializing in monographs of urban artists. Since 2003, he entured across the world to exchange with street artists from different cultures, in order to broaden his horizon on life and on mural painting. From this experience he has been compelled to draw simple characters, mostly children, somehow connected to the chaotic environment in which they are revealed. Witnessing the outcome of globalization, its creations are celebrating traditions. Thus they are defining a hybrid culture between modern expression and traditional representation. His approach aims to arouse an artistic dialogue, whether it is a collaboration with local urban artists or a learning process of traditional techniques from local craftsmen. In addition, Seth is the presenter, author and director of “Les nouveaux explorateurs“, a TV serial show produced by Canal+, each show focusing on a country and its local mural artists. His travels during the last two years are narrated in a book he authored, “Extramuros“.