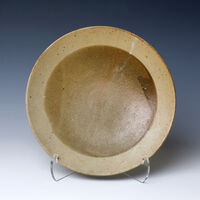 Shoji Hamada, a Living National Treasure in his time, was one of the most influential potters of the 20th century. He spent time working in Mashiko, Japan, as well as St. Ives in England. Hamada was first interested in painting, but discarded it in favor of pottery, figuring, "Even a bad pot has some use, but with a bad painting there is nothing you can do with it except throw it away." Hamada did not receive his training through a traditional apprenticeship, but at the Tokyo Industrial College.

Hamada's work was influenced by a wide variety of folk ceramics, including English medieval pottery, Okinawan stonewares and Korean pottery. His works were not merely copies of the styles he studied, but were unique products of his own creative energy. Hamada had no desire to become a folk potter, but his great respect for the artisan's craft led him to draw as much as possible from folk traditions. Hamada's influence on potters around the world is incalculable, and the village in which he settled, Mashiko, north of Tokyo, has become synonymous with Japanese folk ceramics.