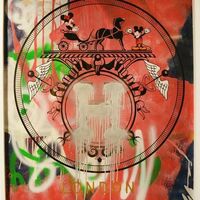 As the youngest artist ever to be internationally exhibited, 19 year-old Los Angeles-based Skyler Grey is a rising star and one of the newest fixtures on the LA street art scene. After the tragic loss of his mother at age 2 and subsequent placement in therapy that involved art and drawing, Grey’s father noticed his son’s incredible artistic interest, talent and creativity. Over the years, with his father’s encouragement and continuous practice on various mediums, Grey has already transformed his talent into an extraordinary career.

Although not formally trained, Skyler has educated himself by exposure to the arts and constant sharpening of his artistic skills. Influenced by artists like Jean-Michel Basquiat and Keith Haring, Grey has developed his own distinctive style and artistic concept. In addition to achieving early success as an artist, Grey has made strides in his community as well, being honored by McDonald’s in 2014 at the 11th Annual 365 Black Awards which honors African Americans who have made positive contributions in the community.

Skyler has recently exhibited at Art Wynwood 2016 and Scope Basel 2016.