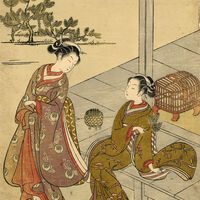 While little is known about his early life, Harunobu Suzuki (né Hozumi) lived and worked in Edo. Said to have been the student of Shigenaga, Harunobu’s early actor prints suggest the strong influence of Toyonobu, Sukenobu and the Torii school. Though Harunobu began with actor prints, his later work focused on young girls and the tantalizing courtesans of Edo. He produced over 500 printed works, as well as many paintings, before his death in 1770. In the spring of 1765, Edo saw the first nishiki-e (“brocade pictures” or full-color prints). Commissioned by wealthy patrons, the first full-color prints took the form of egoyomi (calendar prints). Intricate and lavish, these private works were soon released in separate, public editions through publishers and booksellers. Harunobu used nishiki-e to capture the urban, everyday world of Edo in brilliant color. He is considered a true luminary of ukiyo-e, a talent beyond compare. From shunga (erotic prints) to classical poems, he is a master of color. Harunobu’s genius is particularly apparent in his depictions of young, innocent women. Presenting a delicate, youthful vision of idealized femininity, he influenced many artists to come.