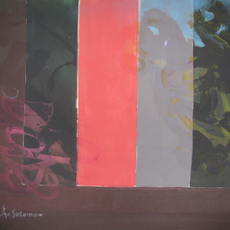 “Here, in simple English, is what Syd Solomon does: He meditates. He connects his hand and paintbrush to the deeper, quieter, more mysterious parts of his mind- and he paints pictures of what he sees and feels down there.”
--Kurt Vonnegut Jr. from Palm Sunday, 1981

Syd Solomon was born near Uniontown, Pennsylvania, in 1917. He began painting in high school in Wilkes-Barre, where he was also a star football player. After high school, he worked in advertising and took classes at the Art Institute of Chicago. Before the attack on Pearl Harbor, he joined the war effort and was assigned to the First Camouflage Battalion, the 924th Engineer Aviation Regiment of the US Army. He used his artistic skills to create camouflage instruction manuals utilized throughout the Army. He married Ann Francine Cohen in late 1941. Soon thereafter, in early 1942, the couple moved to Fort Ord in California where he was sent to camouflage the coast to protect it from possible aerial bombings. Sent overseas in 1943, Solomon did aerial reconnaissance over Holland and met English artists Barbara Hepworth, Ronald Penrose, and Henry Moore, who were also working in camouflage. Solomon was sent to Normandy early in the invasion where his camouflage designs provided protective concealment for the transport of supplies for men who had broken through the enemy line. Solomon was considered one of the best camoufleurs in the Army, receiving among other commendations, five bronze stars. Solomon often remarked that his camouflage experience during World War II influenced his ideas about abstract art. At the end of the War, he attended the École des Beaux-Arts in Paris.
© Berry Campbell, New York