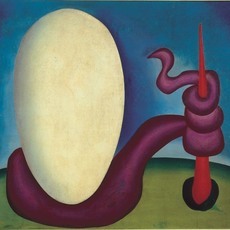 Tarsila do Amaral (1886 – 1973), known simply as Tarsila, is considered to be one of the leading Latin American modernist artists, described as "the Brazilian painter who best achieved Brazilian aspirations for nationalistic expression in a modern style." She was a member of the "Grupo dos Cinco" (Group of Five), which was a group of five Brazilian artists who are considered the biggest influence in the modern art movement in Brazil. Tarsila was also instrumental in the formation of the Antropofagia Movement (1928-1929); she was in fact the one who inspired Oswald de Andrade's famous "Cannibal Manifesto". During a brief return to Paris in 1923, Tarsila was exposed to Cubism, Futurism, and Expressionism while studying with Andre Lhote, Fernand Leger, and Albert Gleizes. European artists in general had developed a great interest in African and primitive cultures for inspiration. This led Tarsila to utilize her own country's indigenous forms while incorporating the modern styles she had studied. While in Paris at this time, she painted one of her most famous works, A Negra (1923).