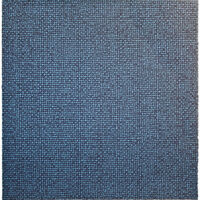 Teo Gonzalez was born in 1964, in Quinto, a small town in Zaragoza, Spain. He grew up painting and drawing but never imagined he would become an artist himself since his access to the art world was limited. It was not until he was twenty years old that it became obvious to him that he was a painter.

Gonzalez developed his signature style at the end of 1990 - works consisting of thousands of drops of water, arranged into a grid pattern, inside of which a small amount of ink or enamel is dropped and left to dry. He describes his art as post-minimal.

For almost thirty years, Teo Gonzalez has relied on the grid to serve as the foundation for all of his work, building layers of carefully plotted individual cells resulting in a topography of undulating patterns and glistening surfaces.

Although the use of the pictorial field and exploration of color in his work draws many comparisons to Abstract Expressionists such as Mark Rothko and Jackson Pollock, his grids and working process bring to mind Minimal artists such as Agnes Martin and Sol Lewitt.