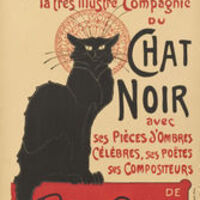 Born in Lausanne, Switzerland, Théophile-Alexandre Steinlen was a prolific illustrator, lithographer, printmaker and also a talented painter and sculptor.
Much of his art demonstrated his concern for social justice for the poor and the working classes.
A lover of cats, masterful depictions of the animals featured prominently in his art.
Using the new technology of photomechanical reproduction, Steinlen created more than 2,000 images published in more than fifty publications.
He also made some 600 original lithographs, etchings and monotypes, as well as oil paintings and sculptures.
He had a vast influence on younger artists ranging from Pablo Picasso (1891-1973) to Edward Hopper (1882-1967).