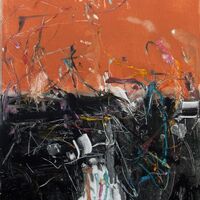 Born in St. Louis, Missouri in 1949, artist Tom Lieber received an MFA from the University of Illinois in 1974. Shortly after graduating he relocated to San Francisco to fulfill his affinity with Bay Area painting.

In 1975 Lieber was a recipient of the National Endowment for the Arts; in 1982 he was selected for the Emerging American Artists’ Exhibition at the Guggenheim Museum in New York curated by Diane Waldman, and was shortly thereafter invited to join Berggruen (FKA John Berggruen Gallery). In 1983 Lieber began making large-scale monotypes with Garner Tullis at Experimental Press. Through Tullis he has met John Walker, Sean Scully, Friedel Dzubas, Helen Frankenthaler, Sam Francis, William Wiley and others.

Since the mid-1980s, Tom Lieber's work has been shown and celebrated internationally; it comprises such permanent collections as the Guggenheim Museum and the Metropolitan Museum of Art in New York City; the San Francisco Museum of Modern Art; the Museum of Contemporary Art in Los Angeles; and the Tate Gallery in London.

In the 2000 the artist moved to Kauai and has continued painting works largely influenced by the environment of Hawaii. Lieber now divides his time between Los Angeles and Kauai.