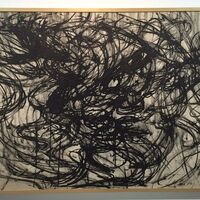 Born in Kyoto, Japan in 1928 Imai was part of the 20th-century Japanese avant-garde. He began painting at the Tokyo State Art Academy. His early works are characterised by colourful abstractions, reminiscent of Fauvism. Imai relocated to Paris in 1953 and exhibited at the Salon de L’Art Sacré the same year. Meanwhile, he attended the Académie de la Grande Chaumière and the Sorbonne. In 1955, Imai abandoned representational art in favour of abstraction. After meeting the art critic Michel Tapié via the artist Sam Francis, Imai was the first Japanese artist to join the Art Informel movement.

In 1956 Imai was invited by the Japanese artist Taro Okamoto to curate The World: Today’s Art in Tokyo. Artists such as Dubuffet, Fautrier, Fontana, and Appel gained important exposure in Japan through the exhibition. In 1957, Imai arranged for Tapié and the artists Georges Mathieu and Sam Francis to travel to Japan, forging a connection between Art Informel and the Ashiya-based Gutai Art Association. Formed in 1954, Gutai was proclaimed a kindred spirit by Tapié and he subsequently promoted it internationally.

Although largely an abstract painter, Imai fluctuated between figurative and abstract, and in the 70s began to integrate poetic text into his paintings. At this time, he lived between Paris and Japan, later participating in a two-year show at the Centre Pompidou in Paris in 1982. In 1984, Imai co-founded the Japanese Contemporary Artists' Association.

Imai’s work was exhibited at the Sao Paulo Biennial in 1953 and the Venice Biennale in 1960 bringing him international acclaim. In addition, his work was sold by the art dealer Leo Castelli in New York in 1956 and was exhibited at the legendary Galerie Stadler in Paris. In 1962 Imai was awarded a prestigious prize at the 5th Exhibition of Japanese Contemporary Art in Tokyo. He received numerous accolades including receiving the Légion d'Honneur in 1996, in 1951 the Kansai-Shinseisaku Prize.