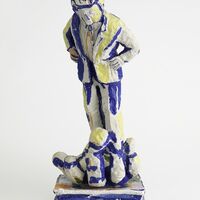 View all works
Career highlights
Reviewed by a major art publication
Artforum, and 2 more
See all past shows and fair booths
Bio
Submitted by Gavlak

Over the course of her five-decade career, Viola Frey (1933-2004, b. Lodi, CA) created boldly colored figurative sculptures, paintings, and works on paper that reflect on contemporary culture, power, and gender dynamics. While most closely aligned with the Bay Area Funk movement, Frey’s immense creative output delves into many aesthetic directions, using a distinctive and personal iconography and palette to depict human figures among objects of antiquity, flea market collectibles, and interior landscapes. Frey considered herself a bricoleur – a junk accumulator – by reinterpreting collectable figurines, philosophical ideas, personal experience, and color theory freely to create new meaning in ceramic and bronze. Her works on paper and paintings echo the sculptures, creating a dynamic back-and-forth conversation between media.

Frey was born in 1933 and raised on her family's vineyard in Lodi, California. In 1951, she moved to Oakland and attended California College of Arts and Crafts (CCAC, now California College of the Arts) and completed her BFA in 1955. She pursued an MFA in Painting at Tulane University, and studied under George Rickey, Katherine Choy, and visiting artist Mark Rothko. Frey left early to explore clay’s artistic capabilities at Choy’s new Clay Art Center in Port Chester, New York. After a few years, she returned to San Francisco in 1960 with a renewed energy for clay as an art form.

Frey taught at CCAC from 1964 to 1999. During her tenure as a faculty member, she served as the Ceramics Department chair, guided the design and construction of the Noni Eccles Treadwell Ceramic Arts Center on CCAC's Oakland campus, and championed the ceramic medium as an art form.

Among her many accomplishments, Frey was the recipient of two National Endowment for the Arts fellowships, a Masters of the Medium for Ceramics from the James Renwick Alliance, and an honorary Doctorate from CCAC.